Much planning for one day!

Schiphol! Now there’s a famous name. I’m sure I’m not saying it right, but just seeing the name on the airport building as we taxi to the gate makes me smile. After two nights in Hong Kong, and pitstops in Bangkok and Dubai, I’ve finally landed. Hong Kong was just a distraction – this is officially day one of my second trip to Europe, and my first trip travelling completely alone. I’m 21, and I have one day in Amsterdam before flying to Paris.

This is the start of a pattern of short trips to the Netherlands. If I briefly move forward to 2013, I’ve now had four trips, none of which have been for more than a week. One day I’ll fix that, but back to 1989…

I’ve been glued to the window for the entire flight across Asia and the Middle East, and I haven’t yet succumbed to sleeping pills for air travel, so I’m a bit shattered.  My travel agent has found me a great deal on a hotel in central Amsterdam, and I have to find the KLM desk to work out transfer options.  I’ve just reached the front of the queue when a couple who look like they may have popped over to buy Amsterdam push in front of me. I’m quite surprised when the girl on the counter asks them to step aside, as the unshaven guy who needs a shower was first.  Miss Amsterdam, I like your style.

There’s nothing like temperatures of -2 degrees Celsius (28 Fahrenheit) to wake you up. I’ve felt nothing like that in my life – that’s a new record; one that doesn’t need to be broken in any great hurry.  It doesn’t seem too long between leaning against the window of a plane, to now be leaning against the window of a bus, but eventually we reach my Hotel. When I see it I have to laugh – the Grand Hotel Krasnapolsky. I simply do not belong here. A porter reaches for my bag, and I momentarily panic as I have no idea if they tip here, or how much is appropriate. 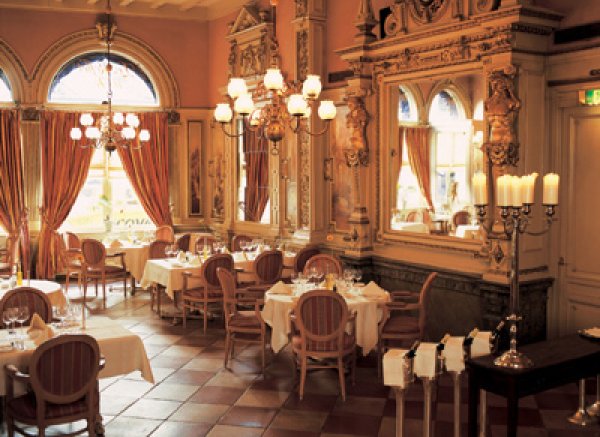 Grand Hotel Krasnapolsky – the inside

It’s still early and my room isn’t ready, so I head out for a walk down the Damrak and the surrounding streets. Almost immediately someone comes up to me and tries to sell me some weed; I guess someone my age staying at a fairly flash hotel is an obvious target. Being alone in the Netherlands, this doesn’t sound like a very sensible option, so I politely decline. He doesn’t give up and tries for a second time, but I manage to still be polite. When he comes up to me for a third time, my lack of sleep and my dwindling patience leave no room in my reply for any misunderstanding. I don’t see him again, but wandering down the Damrak, I can see young homeless people sleeping in the sidestreets. We don’t really have that in New Zealand (or at least we didn’t in 1989), so I’m a bit shocked. I’m not really getting a great first impression. After the girl on the desk at Schiphol, it’s all been a bit downhill.

I’m booked in for a tour that day to see as much as possible without having to lift my feet too often. We visit the Royal Palace, the Jordaan Quarter, Costers Diamonds, the Amsterdam Hilton (of John Lennon fame), and of course the Anne Frank house – easily the highlight of the day. I’m part of a busload that squeezes into the house, so it’s a crush, but our visit is in complete silence. I find the newspaper clippings of hollywood stars the most touching. It’s incredible to think that these were once cut out by Anne herself, and a reminder that in some ways she was like any other child of her time.

Our tour continues with the obligatory photo opportunity of a windmill, followed by a Canal cruise. Amsterdam is a beautiful city, but it’s all so rushed, and because I know no-one here, I’ve barely spoken to anyone apart from my dealers back on the Damrak. Apart from the emotional hit of the Anne Frank House, I don’t really feel that I’m connecting with this place.

After dinner I take another walk around, and come across a museum that hadn’t made any of my guidebooks – the Sexmuseum. It’s quite an eye opener, and not something you would have found on the main street of Auckland in 1989.  Of course, I have to see what all the fuss is about with the famous Red Light District. It’s certainly not what I expected. I had assumed that the prostitutes would all be blonde local girls, but they were almost exclusively Asian. An Asian tour group pushes past with jaws dropped – they seem stunned. Maybe they weren’t expecting to see Asian girls either.  They all look bored to tears and seem to barely notice the hordes staring at them – with one exception. One girl looks up at me, and gives me a “come hither” gesture with her fingers. It scares the hell out of me, and I decide to call it a night.

The next morning, I quickly purchase my “I vaguely remember being in Amsterdam” t-shirt, and I’m off to Paris. I know that I’ve missed what may have been the highlight of my visit – the Van Gogh Museum, but I’m hoping that this will be possible on a return trip.

The next visit comes around in 1990, again for one day, and again it’s not possible to get to the Van Gogh Museum. The next visit is not until 2007, when I’m in Amsterdam for work, but with no spare time. Finally, in 2008, the stars align and another work trip to Amsterdam this time extends over the weekend.  My Boss thinks that painting is for the outside of houses, and doesn’t understand my interest.

I find Van Gogh’s story fascinating, and I’m particularly amazed how someone can dedicate himself so deeply to art, having sold only one painting in his lifetime. I don’t understand why his paintings weren’t popular while he was alive – their beauty and power seem obvious now. The museum is fantastic, and it’s easy to follow Van Gogh’s life through his work. It’s definitely been worth the wait. After so many years, I’m determined to get a souvenir, but I don’t have room in my suitcase for anything larger than a Van Gogh toothpick, and they seem to be just about the only thing you can’t buy here. After careful deliberation, I finally decide on a Van Gogh bookmark. I’ve had a bookmark from Paris that was with me for years, but after a sad incident where it was snapped in half, a replacement is needed.

As others in the line are buying their Van Gogh handbags, scarves or coffee cup set, my bookmark looks a bit tragic. At least I know that any purchase gets a mystery gift – regardless of cost, size or weight – so who’s looking silly now? I try to look nonchalant, but I’m keen to see the mystery gift. Anything from here would be just fine – and it’s just what I needed: a Van Gogh bookmark.